Read through the most famous quotes from George McGovern

I'm fed up to the ears with old men dreaming up wars for young men to die in. ↗

But it is hazardous and, I believe, counterproductive to become frozen in time by an obsession with past wrongs and errors. ↗

Politics is an act of faith; you have to show some kind of confidence in the intellectual and moral capacity of the public. ↗

You know, sometimes, when they say you're ahead of your time, it's just a polite way of saying you have a real bad sense of timing. ↗

I am fed up with a system which busts the pot smoker and lets the big dope racketeer go free. ↗

Empathy is born out of the old biblical injunction 'Love the neighbor as thyself.' ↗

The Establishment center... has led us into the stupidest and cruelest war in all history. That war is a moral and political disaster - a terrible cancer eating away at the soul of our nation. ↗

I make one pledge above all others - to seek and speak the truth with all the resources of mind and spirit I command. ↗

#command #i #make #mind #others

No man should advocate a course in private that he's ashamed to admit in public. ↗ 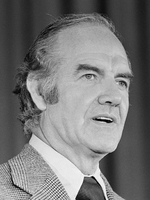 Did you know about George McGovern?

McGovern born in 1868 was pastor of the local Wesleyan Methodist Church there. In October 2006 the $8. McGovern recognized the mixed results of his 1972 candidacy saying "We made a serious effort to open the doors of the Democratic Party – and as soon as we did half the Democrats walked out.

He was elected to the U. Re-elected Senator in 1968 and 1974 McGovern was defeated in a bid for a fourth term in 1980. As the first director of the Food for Peace program in 1961 McGovern oversaw the distribution of U.