Read through the most famous quotes from C. S. Lewis

I believe in Christianity as I believe that the sun has risen: not only because I see it, but because by it I see everything else. ↗

#because #believe #christianity #else #everything

The task of the modern educator is not to cut down jungles, but to irrigate deserts. ↗

If you look for truth, you may find comfort in the end; if you look for comfort you will not get either comfort or truth only soft soap and wishful thinking to begin, and in the end, despair. ↗

No one ever told me that grief felt so like fear. ↗

Education without values, as useful as it is, seems rather to make man a more clever devil. ↗

Miracles are a retelling in small letters of the very same story which is written across the whole world in letters too large for some of us to see. ↗

What saves a man is to take a step. Then another step. ↗

A young man who wishes to remain a sound atheist cannot be too careful of his reading. ↗

Failures are finger posts on the road to achievement. ↗

Miracles do not, in fact, break the laws of nature. ↗ 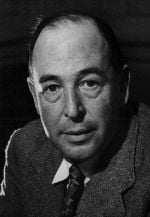 Did you know about C. S. Lewis?

Of Tolkien Lewis writes in Surprised by Joy:


Novelist
In addition to his scholarly work Lewis wrote a number of popular novels including the science fiction Space Trilogy for adults and the Narnia fantasies for children. Mere Christianity The Problem of Pain and Miracles were all concerned to one degree or another with refuting popular objections to Christianity such as "How could a good God allow pain to exist in the world?".