Read through the most famous quotes from Bob Marley

One good thing about music, when it hits you, you feel no pain. ↗

The truth is, everyone is going to hurt you. You just got to find the ones worth suffering for. ↗

Who are you to judge the life I live? I know I'm not perfect -and I don't live to be- but before you start pointing fingers... make sure you hands are clean! ↗

None but ourselves can free our minds. ↗

#minds #none #our #ourselves

One love, one heart, one destiny. ↗

Don't Gain The World & Lose Your Soul, Wisdom Is Better Than Silver Or Gold. ↗

The greatness of a man is not in how much wealth he acquires, but in his integrity and his ability to affect those around him positively ↗

Better to die fighting for freedom then be a prisoner all the days of your life. ↗

The good times of today are the sad thoughts of tomorrow. ↗ 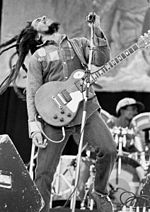 Did you know about Bob Marley?

I don't have prejudice against meself. See also
List of peace activists. In 2001 he was posthumously awarded the Grammy Lifetime Achievement Award and a feature-length documentary about his life Rebel Music won various awards at the Grammys.

He was the rhythm guitarist and lead singer for the ska rocksteady and reggae bands The Wailers (1963-1974) and Bob Marley & The Wailers (1974–1981). His best-known hits include "I Shot the Sheriff" "No Woman No Cry" "Could You Be Loved" "Duppy Conqueror" "Stir It Up" "Get Up Stand Up" "Jamming" "Redemption Song" "One Love" and "Three Little Birds" as well as the posthumous releases "Buffalo Soldier" and "Iron Lion Zion". Nesta Robert "Bob" Marley OM (6 February 1945 – 11 May 1981) was a Jamaican singer-songwriter and musician.