Read through the most famous quotes from Confucius

Choose a job you love, and you will never have to work a day in your life. ↗

By three methods we may learn wisdom: First, by reflection, which is noblest; Second, by imitation, which is easiest; and third by experience, which is the bitterest. ↗

Everything has beauty, but not everyone sees it. ↗

If you make a mistake and do not correct it, this is called a mistake. ↗

Our greatest glory is not in never falling, but in rising every time we fall. ↗

#every #every time #fall #falling #glory

He who knows all the answers has not been asked all the questions. ↗

Life is really simple, but we insist on making it complicated. ↗

It does not matter how slowly you go as long as you do not stop. ↗

Wherever you go, go with all your heart. ↗

#heart #wherever #you #your

The man who moves a mountain begins by carrying away small stones. ↗ 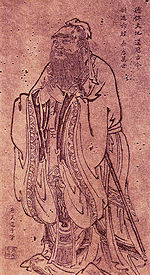 Did you know about Confucius?

A good example is found in this famous anecdote:

廄焚。子退朝，曰：“傷人乎？” 不問馬。
When the stables were burnt down on returning from court Confucius said "Was anyone hurt?" He did not ask about the horses. Because of the huge interest in the Confucius family tree there was a project in China to test the DNA of known family members. Kung Te-cheng died in October 2008 and his son Kung Wei-yi the 78th lineal descendant had died in 1989.

Following the victory of Han over Chu after the collapse of Qin Confucius's thoughts received official sanction and were further developed into a system known as Confucianism. He espoused the well-known principle "Do not do to others what you do not want done to yourself" an early version of the Golden Rule. The philosophy of Confucius emphasized personal and governmental morality correctness of social relationships justice and sincerity.