Read through the most famous quotes from Bruce Lee

Do not pray for an easy life, pray for the strength to endure a difficult one ↗

Be happy, but never satisfied. ↗

A wise man can learn more from a foolish question than a fool can learn from a wise answer. ↗

The doubters said, "Man can not fly," The doers said, "Maybe, but we'll try," And finally soared In the morning glow While non-believers Watched from below. ↗

To hell with circumstances; I create opportunities. ↗

A goal is not always meant to be reached, it often serves simply as something to aim at. ↗

Don't fear failure. — Not failure, but low aim, is the crime. In great attempts it is glorious even to fail. ↗

If you don't want to slip up tomorrow, speak the truth today. ↗ 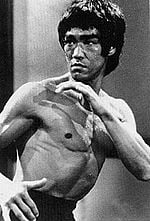 Did you know about Bruce Lee?

The man was described by Jesse Glover as a karate man who also had a blackbelt in judo though Glover who was a brown belt in judo at the time claimed to be better than the man in judo. The same year he also choreographed fight scenes for The Wrecking Crew starring Dean Martin Sharon Tate and featuring Chuck Norris in his first role. Photo shoot costume tests were also organized for some of these planned film projects.

He initially trained in Wing Chun but later rejected well-defined martial art styles favouring instead the use of techniques from various sources in the spirit of his personal martial arts philosophy which he dubbed Jeet Kune Do (The Way of the Intercepting Fist). Lee moved to the United States at the age of 18 to receive his higher education and it was during this time that he began teaching martial arts.