Read through the most famous quotes from Albert Einstein

Two things are infinite: the universe and human stupidity; and I'm not sure about the universe. ↗

I am enough of an artist to draw freely upon my imagination. Imagination is more important than knowledge. Knowledge is limited. Imagination encircles the world. ↗

If you can't explain it to a six year old, you don't understand it yourself. ↗

The difference between genius and stupidity is; genius has its limits. ↗

Life is like riding a bicycle. To keep your balance, you must keep moving. ↗

Anyone who has never made a mistake has never tried anything new. ↗

#anything #made #mistake #never #new

Creativity is knowing how to hide your sources ↗ 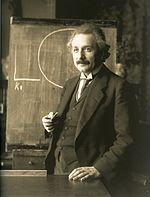 Did you know about Albert Einstein?

Much later questions were raised whether the measurements had been accurate enough to support Einstein's theory. Their readings included the works of Henri Poincaré Ernst Mach and David Hume which influenced his scientific and philosophical outlook. Quantizing these oscillators each level will have an integer occupation number which will be the number of particles in it.

Later with the British philosopher Bertrand Russell Einstein signed the Russell–Einstein Manifesto which highlighted the danger of nuclear weapons. Einstein was in support of defending the Allied forces but largely denounced using the new discovery of nuclear fission as a weapon. Roosevelt that Germany might be developing an atomic weapon and recommended that the U.