Read through the most famous quotes from Benjamin Franklin

#reading #something #worth #worth reading #write

Three may keep a secret, if two of them are dead. ↗

They who can give up essential liberty to obtain a little temporary safety deserve neither liberty nor safety. ↗

#essential #give #liberty #little #neither

Tell me and I forget, teach me and I may remember, involve me and I learn. ↗

A Penny Saved is a Penny Earned ↗

He that can have patience can have what he will. ↗

Fear not death for the sooner we die, the longer we shall be immortal. ↗

In wine there is wisdom, in beer there is Freedom, in water there is bacteria. ↗

You may delay, but time will not. ↗ 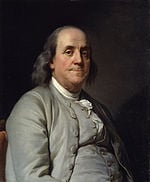 Did you know about Benjamin Franklin?

He facilitated many civic organizations including a fire department and a university. From 1785 to 1788 he served as governor of Pennsylvania. His colorful life and legacy of scientific and political achievement and status as one of America's most influential Founding Fathers have seen Franklin honored on coinage and money; warships; the names of many towns counties educational institutions namesakes and companies; and more than two centuries after his death countless cultural.

"
Franklin always proud of his working class roots became a successful newspaper editor and printer in Philadelphia the leading city in the colonies. He was also partners with William Goddard and Joseph Galloway the three of whom publiBenjamin Franklind the Pennsylvania Chronicle a newspaper that was known for its revolutionary sentiments and criticisms of the British monarchy in the American colonies.