Jealousy is never satisfied with anything short of an omniscience that would detect the subtlest fold of the heart.

Read through all quotes from George Eliot 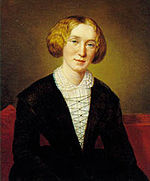 Did you know about George Eliot?

Female authors were publiGeorge Eliotd under their own names during Eliot's life but George Eliot wanted to escape the stereotype of women only writing lighthearted romances. Mary Anne (alternatively Mary Ann or Marian) Evans (22 November 1819 – 22 December 1880) better known by her pen name George Eliot was an English novelist journalist and translator and one of the leading writers of the Victorian era. She is the author of seven novels including Adam Bede (1859) The Mill on the Floss (1860) Silas Marner (1861) Middlemarch (1871–72) and Daniel Deronda (1876) most of them set in provincial England and known for their realism and psychological insight.