Read through the most famous quotes from Diego Rivera

If I ever loved a woman, the more I loved her, the more I wanted to hurt her. Frida was only the most obvious victim of this disgusting trait. ↗

July 13, 1954 was the most tragic day of my life. I had lost my beloved Frida forever. To late now I realized that the most wonderful part of my life had been my love for Frida. ↗

I did not know it then, but Frida had already become the most important fact in my life. And would continue to be, up to the moment she died, 27 years later. ↗

Through her paintings, she breaks all the taboos of the woman's body and of female sexuality. ↗ 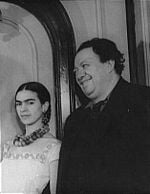 Did you know about Diego Rivera?

December 8 1886 – November 24 1957) was a prominent Mexican painter and husband of Frida Kahlo (1929–39 and 1940–54). who would soon become Rivera's friend and patron as well as the founding director of the Museum of Modern Art. In 1931 a retrospective exhibition of his works was held at the Museum of Modern Art in New York City.