Read through the most famous quotes from Jo Durie

If you can defend, counter-attack and take the initiative then you become a more dangerous player. ↗

It's just nice to see people enthusiastic about their tennis and want to learn and improve - for me that's the most important thing - I still love my tennis. ↗

The British public like a Briton with personality, someone who comes out on court and isn't dour and down on themselves. ↗ 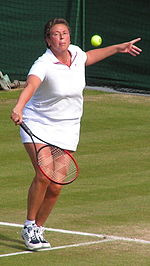 Did you know about Jo Durie?

In 1991 at the age of 30 and one of the oldest singles competitors that year Jo Durie had another successful run to the 4th round of the US Open. At the Australian Open Jo Durie reached her first Grand Slam quarter-final. She was ranked the No.