I don't direct movies for a living.

Read through all quotes from Tommy Lee Jones 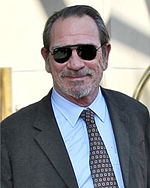 Did you know about Tommy Lee Jones?

Jones moved to New York to become an actor making his Broadway debut in 1969's A Patriot for Me in a number of supporting roles. Jones has stated that his grandmother was of Cherokee ancestry.

Call in the award-winning TV mini-series Lonesome Dove Agent K in Men in Black and its sequels Sheriff Ed Tom Bell in No Country for Old Men the villain "Two-Face" in Batman Forever terrorist William Strannix in Under Siege a Texas Ranger in Man of the House rancher Pete Perkins in The Three Burials of Melquiades Estrada which also served as his directorial debut and Colonel Chester Phillips in Captain America: The First Avenger. His other notable starring roles include former Texas Ranger Woodrow F. S.