I do not say anything from jealousy.

Read through all quotes from Anna Held 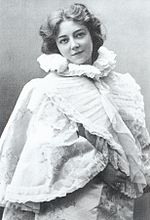 Did you know about Anna Held?

first telecast on NBC. Around this time Anna Held became the wife of a much-older Uruguayan playboy Maximo Carrera with whom Anna Held had a daughter Liane (1895–1988) shortly after their 1894 marriage and who became an actress and producer sometimes billed as Anna Held Jr. Held began working in the garment industry then found work as a singer in Jewish theatres in Paris and later after her father's death London where her roles included the title role in a production by Jacob Adler of Abraham Goldfaden's Shulamith; Anna Held was also in Goldfaden's ill-fated Paris troupe whose cashier stole their money before they ever played publicly.