Read through the most famous quotes from Elizabeth Taylor

The problem with people who have no vices is that generally you can be pretty sure they're going to have some pretty annoying virtues. ↗

It is very strange that the years teach us patience - that the shorter our time, the greater our capacity for waiting. ↗

A woman has got to love a bad man once or twice in her life to be thankful for a good one. ↗

I feel very adventurous. There are so many doors to be opened, and I'm not afraid to look behind them. ↗

#afraid #behind #doors #feel #i

I DID NOT say Pour yourself a drink, put on some lipstick and get yourself together. ↗

I'm a survivor - a living example of what people can go through and survive. ↗

Some of my best leading men have been dogs and horses. ↗

When people say, 'She's got everything', I've got one answer - I haven't had tomorrow. ↗

#everything #got #had #haven #i 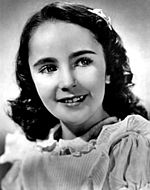 Did you know about Elizabeth Taylor?

Taylor and Burton appeared together in six other films during the decade among them The V. Taylor's older brother Howard Taylor was born in 1929. Tickets for the show were priced at $2500 and more than 500 people attended.

From her early years as a child star with MGM Elizabeth Taylor became one of the great screen actresses of Hollywood's Golden Age. National Velvet (1944) was Taylor's first success and Elizabeth Taylor starred in Father of the Bride (1950) A Place in the Sun (1951) Giant (1956) Cat on a Hot Tin Roof (1958) and Suddenly Last Summer (1959). She won the Academy Award for Best Actress for BUtterfield 8 (1960) played the title role in Cleopatra (1963) and married her co-star Richard Burton.