Read through the most famous quotes from Lil Wayne

Get money or Get nothing ↗

Yeah, my life a bitch, but you know nothing about her Been to hell and back, I can show you vouchers ↗

Prepared for the worst,but still praying for the best ↗

Life is a beach-I'm just playin in the sand ↗

try and kick me while im down ill break ur leg ↗

I am probably in the sky, flying with the fish, or maybe in the ocean, swimming with the pigeons. See, my world is different... ↗ 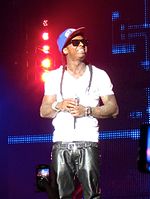 Did you know about Lil Wayne?

In 2008 he was named "Best MC" by Rolling Stone. During their career the Hot Boys had two charting singles "We on Fire" from Get It How U Live! and "I Need a Hot Girl" from Guerrilla Warfare. org states: "The mission of One Family Foundation Inc.

Lil Wayne gained most of his success with the group's major selling album Guerrilla Warfare (1999). His ninth album and first since his release Tha Carter IV (2011) sold 964000 copies in its first week of availability in the U. His next albums Lights Out (2000) and 500 Degreez (2002) were certified gold.