Read through the most famous quotes from Ray Walston

I don't see all the movies that come out. ↗

I feel that the thing that probably aided me the most in that scene with the dog was the utilization and using an actual recreation, affective memory, if you want to call it, of pain. ↗

I have worked with some very great directors. ↗

I love going on location, and the location was nice. ↗

I should have been trying to build a career, rather than leaving it in the hands of somebody else. ↗

#build #career #else #hands #i

I suppose when I was a kid, and I went to movies, and later went to some plays on my own when I got a little older, in New Orleans, where I was living then, I zeroed in on the actor. ↗

I was very conscious of the actor; watched what he did. ↗

#conscious #did #i #very #watched 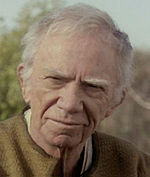 Did you know about Ray Walston?

Just three years later Walston would become one of the first members admitted to the newly formed Actors Studio. Hand" because he had finally torn away from his Martian role. He mostly played small roles with stock companies where he not only starred in traveling shows but also worked at a movie theater selling tickets and cleaning the stage floors.