Read through the most famous quotes from Rosemary Clooney

I felt trapped and fabricated in the fifties living up to other people's expectations. ↗

I loved downers, almost any kind. Loved the colors of them. Loved them yellow... I did. I would just have a bouquet in my hands at night. ↗

#any #bouquet #colors #did #downers

I remember Mitch Miller saying every week, This rock and roll stuff will never last. But one doesn't like to bring that up to Mitch. ↗

I'll keep working as long as I live because singing has taken on the feeling of joy that I had when I started, when my only responsibility was to sing well. ↗

I'm the only instrument that's got the words, so I've got to be able to get that across. ↗

#across #get #got #i #instrument

So you see, you can't do everything alone. ↗

When Bob came through Cincinnati, he wanted a girl singer to be on his show. There was a local contest, and my sister and I entered, but Bob said, Gee, I wouldn't break up the team. ↗ 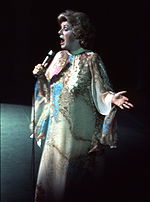 Did you know about Rosemary Clooney?

Rosemary Clooney (May 23 1928 – June 29 2002) was an American singer and actress. Clooney's career languiRosemary Clooneyd in the 1960s partly due to problems related to depression and drug addiction but revived in 1977 when her White Christmas co-star Bing Crosby asked her to appear with him at a show marking his 50th anniversary in show business. She came to prominence in the early 1950s with the novelty hit "Come On-a My House" written by William Saroyan and his cousin Ross Bagdasarian (better known as David Seville the father figure of Alvin and the Chipmunks) which was followed by other pop numbers such as "Botch-a-Me" (a cover version of the Italian song Ba-Ba-Baciami Piccina by Alberto Rabagliati) "Mambo Italiano" "Tenderly" "Half as Much" "Hey There" and "This Ole House" although Rosemary Clooney had success as a jazz vocalist.