Read through the most famous quotes from Rudyard Kipling

Words are, of course, the most powerful drug used by mankind. ↗

#mankind #most #most powerful #powerful #used

I never made a mistake in my life; at least, never one that I couldn't explain away afterwards. ↗

I always prefer to believe the best of everybody; it saves so much trouble ↗

If you can keep your head when all about you Are losing theirs and blaming it on you, If you can trust yourself when all men doubt you, But make allowance for their doubting too;! ↗

If history were taught in the form of stories, it would never be forgotten. ↗

Of all the liars in the world, sometimes the worst are our own fears. ↗

A man can never have too much red wine, too many books, or too much ammunition ↗

I am the Cat who walks by himself, and all places are alike to me. ↗

You must learn to forgive a man when he's in love. He's always a nuisance. ↗

Buy a pup and your money will buy Love unflinching that cannot lie. ↗ 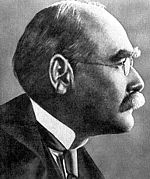 Did you know about Rudyard Kipling?

Kipling so loved his masonic experience that he memorialised its ideals in his famous poem "The Mother Lodge". He is regarded as a major "innovator in the art of the short story"; his children's books are enduring classics of children's literature; and his best works are said to exhibit "a versatile and luminous narrative gift".

George Orwell called him a "prophet of British imperialism". : /ˈrʌdjəd ˈkɪplɪŋ/ RUD-yəd KIP-ling; 30 December 1865 – 18 January 1936) was an English short-story writer poet and novelist chiefly remembered for his tales and poems of British soldiers in India and his tales for children. Kipling was one of the most popular writers in England in both prose and verse in the late 19th and early 20th centuries.