Read through the most famous quotes from Winston Churchill

Success is not final, failure is not fatal: it is the courage to continue that counts. ↗

You have enemies? Good. That means you've stood up for something, sometime in your life. ↗

Men occasionally stumble over the truth, but most of them pick themselves up and hurry off as if nothing ever happened. ↗

My tastes are simple: I am easily satisfied with the best. ↗

If you are going through hell, keep going. ↗

A lie gets halfway around the world before the truth has a chance to get its pants on. ↗

#before #chance #get #gets #halfway

History will be kind to me for I intend to write it. ↗

Tact is the ability to tell someone to go to hell in such a way that they look forward to the trip. ↗ 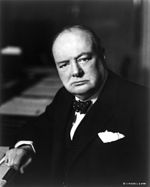 Did you know about Winston Churchill?

He then briefly resumed active army service on the Western Front as commander of the 6th Battalion of the Royal Scots Fusiliers. His steadfast refusal to consider defeat surrender or a compromise peace helped inspire British resistance especially during the difficult early days of the War when Britain stood alone among European countries in its active opposition to Adolf Hitler. A noted statesman and orator Churchill was also an officer in the British Army a historian a writer and an artist.