Read through the most famous quotes from Albert Schweitzer

Sometimes our light goes out, but is blown again into instant flame by an encounter with another human being. ↗

The only escape from the miseries of life are music and cats... ↗

If you love something so much let it go. If it comes back it was meant to be; if it doesn't it never was ↗

Success is not the key to happiness. Happiness is the key to success. If you love what you are doing, you will be successful. ↗

Until he extends the circle of his compassion to all living things, man will not himself find peace. ↗

The tragedy of life is what dies inside a man while he lives. ↗

Think occasionally of the suffering of which you spare yourself the sight. ↗

I don't know what your destiny will be, but one thing I know: the only ones among you who will be really happy are those who have sought and found how to serve. ↗

Example is not the main thing in influencing others. It is the only thing. ↗

#influencing #main #main thing #only #others

At times our own light goes out and is rekindled by a spark from another person. Each of us has cause to think with deep gratitude of those who have lighted the flame within us. ↗

#cause #deep #each #flame #goes 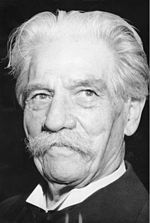 Did you know about Albert Schweitzer?

Schweitzer a Lutheran challenged both the secular view of Jesus as depicted by historical-critical methodology current at his time in certain academic circles as well as the traditional Christian view. As a music scholar and organist he studied the music of German composer Johann Sebastian Bach and influenced the Organ reform movement (Orgelbewegung). He was born in Kaysersberg in the province of Alsace-Lorraine at that time part of the German Empire.