Read through the most famous quotes from Dodie Smith

Noble deeds and hot baths are the best cures for depression. ↗

How I wish I lived in a Jane Austen novel! ↗

I only want to write. And there's no college for that except life. ↗

I write this sitting in the kitchen sink. ↗

Perhaps watching someone you love suffer can teach you even more than suffering yourself can. ↗

Even a broken heart doesn't warrant a waste of good paper. ↗

And no bathroom on earth will make up for marrying a bearded man you hate. ↗

I shouldn't think even millionaires could eat anything nicer than new bread and real butter and honey for tea. ↗

Why is summer mist romantic and autumn mist just sad? ↗ 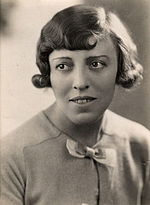 Did you know about Dodie Smith?

Barnes writes of the complicated task in his essay "Literary Executions" revealing among other things how he secured the return of the film rights to I Capture the Castle which had been held by Disney since 1949 Smith's personal papers are housed in Boston University's Howard Gotlieb Archival Research Center and include manuscripts photographs artwork and correspondence (including letters from Christopher IDodie Smithrwood and John Gielgud). Its success and the discovery of her identity by journalists inspired the newspaper headline "Shopgirl Writes Play". She and Beesley also spent time in Beverly Hills Malibu and Wilton Connecticut.

Dorothy Gladys "Dodie" Smith (3 May 1896 – 24 November 1990) was an English novelist and playwright. Her other works include I Capture the Castle and The Starlight Barking. Smith is best known for her novel The Hundred and One Dalmatians.