Read through the most famous quotes from Dwight Schultz

Being closer to the genesis of this whole period, it captured the importance of the concept of making contact and accurately depicted the paranoia of the time. It's an excellent film. ↗

Governments are moved by numbers, and the greater the number of people who admit that they believe, the greater the likelihood that the secret - if there is one being kept - will be revealed. ↗

#back #come #ever #his #hostage

I find that easier to accept than this all happened out of nothing. ↗

#easier #find #happened #i #nothing

I've been blessed with some lovely scripts and a character that people could truly identify with. It's one of those surprises in life that makes you think, 'God was smiling on me that particular day. ↗

I've spent a lot of time researching the subject and government deception. So to be involved in Star Trek is perfect for me. I enjoy meeting the fans and discussing my interests with them. ↗

If they're traveling at the speed of light, their month is perhaps the equivalent of twenty of our years. So they're just buzzing around having a good old time, continuously looking. ↗

In fact, their eyes sort of roll around and they kind of go, 'Hmm'- like there's something there and they don't want to talk about it. But they're not that kind when they are speaking in public. ↗

It could be that people just want to be connected to something that's bigger than they are that can't be proven. I don't know, I don't think that's it. ↗

#connected #could #i #just #know

It rolls off my back. Ridicule doesn't mean anything - even from people you're supposed to wear knee pads around, like the scientific community. ↗

#around #back #community #even #knee 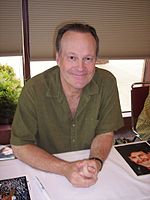 Did you know about Dwight Schultz?

He also posts political commentaries and podcasts on his official fansite. Animo in the Ben 10 series Chef Mung Daal in the children's cartoon Chowder and Eddie the Squirrel in CatDog. Wayne Fiscus on the television show St.

William Dwight Schultz (born November 24 1947) is an American stage television film actor and voice artist. He is best known for his roles as Captain "Howling Mad" Murdock on the 1980s action series The A-Team and as Reginald Barclay in Star Trek: The Next Generation Star Trek: Voyager and the film Star Trek: First Contact.