Read through the most famous quotes from Kendrick Lamar

Am I the only one who measures time using songs? “Oh it only took me 4 songs to get here! that’s not to long! ↗

Groups break up because they never got across what they wanted to do personally, and they have creative differences, and egos start to clash. ↗

#because #break #break up #clash #creative

I always tell people that if I move anywhere it would be Toronto. ↗

#anywhere #i #i always #move #people

I can't help the way you was born if you was gay. ↗

I don't really believe in the type of pressure that people are wanting to put on the type of music that I make. ↗

I always felt like there was a certain standard of music that I had to do from the beginning, even when I didn't have the recognition that I have now. ↗

#beginning #certain #even #felt #had

I had to come from something, come from a place that was negative and positive but the majority of it is a negative place. ↗

#had #i #majority #negative #place

I knew I was blessed with a gift of having both parents. ↗

Eventually you get to this point where you understand what you want to do and get across and sound like. ↗ 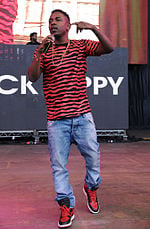 Did you know about Kendrick Lamar?

2010–2011: Overly Dedicated
In 2010 he toured with Tech N9ne and Jay Rock on The Independent Grind tour. In March 2012 MTV announced that Top Dawg Entertainment closed a joint venture deal with Interscope Records and Aftermath Entertainment marking the end of Lamar's career as an independent artist. In 2012 Lamar toured alongside Drake on his Club Paradise Tour opening along with fellow rappers ASAP Rocky and 2 Chainz.