Read through the most famous quotes from Michael Jordan

My attitude is that if you push me towards something that you think is a weakness, then I will turn that perceived weakness into a strength. ↗

You must expect great things of yourself before you can do them. ↗

To be successful you have to be selfish, or else you never achieve. And once you get to your highest level, then you have to be unselfish. Stay reachable. Stay in touch. Don't isolate. ↗

I've never lost a game I just ran out of time. ↗

Everybody has talent, but ability takes hard work. ↗

Don't let them drag you down by rumors just go with what you believe in. ↗

What is love? Love is playing every game as if it's your last! ↗ 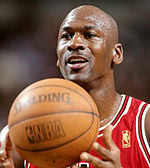 Did you know about Michael Jordan?

On May 7 2003 Wizards owner Abe Pollin fired Jordan as Washington's President of Basketball Operations. Most of the Pistons went directly to their locker room instead of shaking hands with the Bulls. " When Bradley asked him if his gambling ever got to the level where it jeopardized his livelihood or family Jordan replied "No.

He is the majority owner and head of basketball operations for the NBA's Charlotte Bobcats having won a bidding war to buy controlling interest in the team from founding owner Robert L. He also gained a reputation for being one of the best defensive players in basketball. Michael Jeffrey Jordan (born February 17 1963) also known by his initials MJ is an American former professional basketball player entrepreneur and majority owner and chairman of the Charlotte Bobcats.