Read through the most famous quotes from William Hazlitt

The only vice that cannot be forgiven is hypocrisy. The repentance of a hypocrite is itself hypocrisy. ↗

#forgiven #hypocrisy #hypocrite #itself #only

#between #difference #laughs #man #only

The art of conversation is the art of hearing as well as of being heard. ↗

He will never have true friends who is afraid of making enemies. ↗

Love turns, with little indulgence, to indifference or disgust: hatred alone is immortal. ↗

#love #others #ourselves #power #love

The art of life is to know how to enjoy a little and to endure much. ↗

A great chessplayer is not a great man, for he leaves the world as he found it. ↗

Grace is rhwe absence of everything that indicates pain or difficulty, hesitation or incogruity. ↗ 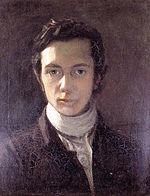 Did you know about William Hazlitt?

Edited by P. Together with some newly written and one brought in from the "Table-Talk" series they were collected in book form in 1825 as The Spirit of the Age: Or Contemporary Portraits. One or two positive reviews appeared such as the one in the Globe 7 June 1823: "The Liber Amoris is unique in the English language; and as possibly the first book in its fervour its vehemency and its careless exposure of passion and weakness—of sentiments and sensations which the common race of mankind seek most studiously to mystify or conceal—that exhibits a portion of the most distinguishing characteristics of Rousseau it ought to be generally praised".

Yet his work is currently little read and mostly out of print. He is now considered one of the great critics and essayists of the English language placed in the company of Samuel Johnson and George Orwell.