Read through the most famous quotes from Arthur Hailey

I loved education, and, yes, I did want to go on learning. ↗

I don't think I really invented anybody. I have drawn on real life. ↗

I set myself 600 words a day as a minimum output, regardless of the weather, my state of mind or if I'm sick or well. There must be 600 finished words-not almost right words. ↗

Long afterward, many would remember those two days in the first week of October with vividness and anguish. ↗

The president of General Motors was in a foul humor. ↗

There I was, an 18-year-old mimic rooming with a blind whistler. ↗

When I began writing that I was able and did travel and met some fascinating people and also uncovered some history, which has not been discovered before. ↗

#also #been #before #began #did 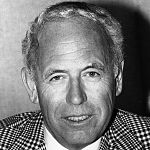 Did you know about Arthur Hailey?

List of novelists. Hailey died in his Bahamian home at the age of 84. Taylor.

Most of the novels are set within one major industry such as hotels banks or airlines and explore the particular human conflicts sparked-off by that environment. Arthur Hailey (5 April 1920 – 24 November 2004) was a British/Canadian novelist whose works have sold more than 170 million copies in 40 languages.