Read through the most famous quotes from Edgar Allan Poe

I became insane, with long intervals of horrible sanity. ↗

All that we see or seem is but a dream within a dream. ↗

I have great faith in fools - self-confidence my friends will call it. ↗

We loved with a love that was more than love. ↗

I was never really insane except upon occasions when my heart was touched. ↗

There is no exquisite beauty… without some strangeness in the proportion. ↗

Believe only half of what you see and nothing that you hear. ↗

Never to suffer would never to have been blessed. ↗ 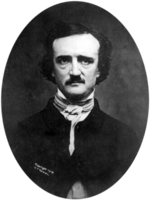 Did you know about Edgar Allan Poe?

Jefferson had enacted a system of student self-government allowing students to choose their own studies make their own arrangements for boarding and report all wrongdoing to the faculty. Though it made Poe a household name almost instantly he was paid only $9 for its publication. Legacy


Literary influence
During his lifetime Poe was mostly recognized as a literary critic.

He began planning to produce his own journal The Penn (later renamed The Stylus) though he died before it could be produced. Poe was taken in by John and Frances Allan of Richmond Virginia but they never formally adopted him. In January 1845 Poe publiEdgar Allan Poed his poem "The Raven" to instant success.