Read through the most famous quotes from Maya Angelou

There is no greater agony than bearing an untold story inside you. ↗

If you don't like something, change it. If you can't change it, change your attitude. Don't complain. ↗

The first time someone shows you who they are, believe them. ↗

I can be changed by what happens to me. But I refuse to be reduced by it. ↗

We delight in the beauty of the butterfly, but rarely admit the changes it has gone through to achieve that beauty. ↗

I love to see a young girl go out and grab the world by the lapels. Life's a bitch. You've got to go out and kick ass. ↗

You may not control all the events that happen to you, but you can decide not to be reduced by them. ↗

Music was my refuge. I could crawl into the space between the notes and curl my back to loneliness. ↗

Courage: the most important of all the virtues because without courage, you can't practice any other virtue consistently. ↗

I've learned that you can tell a lot about a person by the way (s)he handles these three things: a rainy day, lost luggage, and tangled Christmas tree lights. ↗ 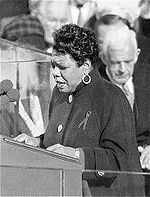 Did you know about Maya Angelou?

As Gillespie states "If 1968 was a year of great pain loss and sadness it was also the year when America first witnessed the breadth and depth of Maya Angelou's spirit and creative genius". As of 2008 Maya Angelou owned two homes in Winston-Salem North Carolina and one in Harlem full of her "growing library" of books Maya Angelou has collected throughout her life artwork collected over the span of many decades and well-stocked kitchens. Angelou has one son Guy whose birth was described in her first autobiography one grandson and two young great-grandchildren and according to Gillespie a large group of friends and extended family.

She is respected as a spokesperson of Black people and women and her works have been considered a defense of Black culture. : /ˈmaɪ. Maya Angelou (pron.