Read through the most famous quotes from Ralph Waldo Emerson

We are students of words: we are shut up in schools, and colleges, and recitation -rooms, for ten or fifteen years, and come out at last with a bag of wind, a memory of words, and do not know a thing. ↗

To be yourself in a world that is constantly trying to make you something else is the greatest accomplishment. ↗

#be yourself #constantly #else #greatest #make

For every minute you are angry you lose sixty seconds of happiness. ↗

It is one of the blessings of old friends that you can afford to be stupid with them. ↗

What lies behind us and what lies before us are tiny matters compared to what lies within us. ↗

Always do what you are afraid to do. ↗

Do not go where the path may lead, go instead where there is no path and leave a trail. ↗

#go #instead #lead #leave #may

Make your own Bible. Select and collect all the words and sentences that in all your readings have been to you like the blast of a trumpet. ↗

Our greatest glory is not in never failing, but in rising up every time we fail. ↗

#every #every time #fail #failing #glory

All I have seen teaches me to trust the creator for all I have not seen. ↗

#creator #i #me #seen #teaches 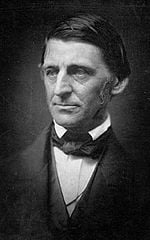 Did you know about Ralph Waldo Emerson?

Emerson. Emancipation is the demand of civilization". I wish to learn this language not that I may know a new grammar but that I may read the great book that is written in that tongue.

"
His essays remain among the linchpins of American thinking[citation needed] and his work has greatly influenced the thinkers writers and poets that have followed him. He was seen as a champion of individualism and a prescient critic of the countervailing pressures of society and he disseminated his thoughts through dozens of publiRalph Waldo Emersond essays and more than 1500 public lectures across the United States. Together with Nature these essays made the decade from the mid-1830s to the mid-1840s Emerson's most fertile period.