Read through the most famous quotes from Freddie Mercury

Modern paintings are like women, you'll never enjoy them if you try to understand them. ↗

My soul has painted like the wings of butterflies, Fairy tales of yesterday will grow but never die, I can fly, my friends... ↗

I am a romantic, but I do put up a barrier around myself, so it is hard for people to get in and to know the real me ↗

What will I be doing in twenty years' time? I'll be dead, darling! Are you crazy? ↗

When I'm dead, I want to be remembered as a musician of some worth and substance. ↗

#i #musician #remembered #some #substance

I dress to kill, but tastefully. ↗

I always knew I was a star And now, the rest of the world seems to agree with me. ↗

A concert is not a live rendition of our album. It's a theatrica! event. ↗

Money may not buy happiness, but it can damn well give it! ↗

#damn #give #happiness #may #money 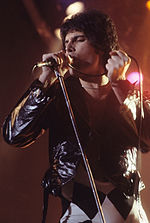 Did you know about Freddie Mercury?

According to the Recording Industry Association of America Queen have sold 34. The only friend I've got is Mary and I don't want anybody else. Bad Guy debuted in the top ten of the UK Album Charts.

In addition to his work with Queen he led a solo career and also occasionally served as a producer and guest musician (piano or vocals) for other artists. Mercury was a Parsi born in Zanzibar and grew up there and in India until his mid-teens. In 2005 a poll organised by Blender and MTV2 saw Mercury voted the greatest male singer of all time.