Read through the most famous quotes from George Washington

It is better to offer no excuse than a bad one. ↗

#bad one #better #excuse #offer #than

It is better to be alone than in bad company. ↗

It is impossible to rightly govern a nation without God and the Bible. ↗

If freedom of speech is taken away, then dumb and silent we may be led, like sheep to the slaughter. ↗

Make sure you are doing what God wants you to do--then do it with all your strength. ↗

A free people ought...to be armed ↗

My mother was the most beautiful woman I ever saw. All I am I owe to my mother. I attribute my success in life to the moral, intellectual and physical education I received from her. ↗

Government is not reason, it is not eloquence – it is force. Like fire, it is a dangerous servant and fearful master. ↗

There is nothing which can better deserve our patronage than the promotion of science and literature. Knowledge is in every country the surest basis of public happiness. ↗ 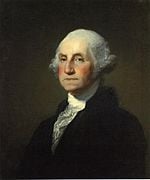 Did you know about George Washington?

1777 campaigns
In the late summer of 1777 the British under John Burgoyne sent a major invasion army south from Quebec with the intention of splitting off rebellious New England. United States Constitution

In 1753 the French began expanding their military control into the "Ohio Country" a territory also claimed by the British colonies of Virginia and Pennsylvania.

As the leader of the first successful revolution against a colonial empire in world history Washington became an international icon for liberation and nationalism especially in France and Latin America. Chosen by the Second Continental Congress in 1775 to be commander-in-chief of the Continental Army in the American Revolution Washington managed to force the British out of Boston in 1776 but was defeated and almost captured later that year when he lost New York City. His leadership style establiGeorge Washingtond many forms and rituals of government that have been used since such as using a cabinet system and delivering an inaugural address.