Read through the most famous quotes from Ronald Reagan

If we ever forget that we're one nation under God, then we will be one nation gone under. ↗

I have left orders to be awakened at any time during national emergency, even if I'm in a cabinet meeting. ↗

I've noticed that everyone who is for abortion has already been born. ↗

The most terrifying words in the English language are: I'm from the government and I'm here to help. ↗

Within the covers of the Bible are the answers for all the problems men face. ↗

There is no limit to the amount of good you can do if you don't care who gets the credit. ↗

You can tell a lot about a fellow's character by his way of eating jellybeans. ↗ 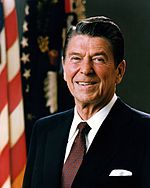 Did you know about Ronald Reagan?

Every year since 2002 California Governors Gray Davis and Arnold Schwarzenegger have proclaimed February 6 "Ronald Reagan Day" in the state of California in honor of their most famous predecessor. C. Boulware known for his tough stance against unions and his innovative strategies to win over workers championed the core tenets of modern American conservatism: free markets anticommunism lower taxes and limited government.

A conservative icon he ranks highly in public opinion polls of U. His supply-side economic policies dubbed "Reaganomics" advocated reducing tax rates to spur economic growth controlling the money supply to reduce inflation deregulation of the economy and reducing government spending. Presidents and is credited for generating an ideological renaissance on the American political right.