Read through the most famous quotes from Thomas Jefferson

I cannot live without books. ↗

#cannot #i #live #without

Do you want to know who you are? Don't ask. Act! Action will delineate and define you. ↗

I predict future happiness for Americans, if they can prevent the government from wasting the labors of the people under the pretense of taking care of them. ↗

Honesty is the first chapter of the book wisdom. ↗

The most valuable of all talents is that of never using two words when one will do. ↗

On matters of style, swim with the current, on matters of principle, stand like a rock. ↗

Dissent is the highest form of patriotism. [Misattributed] ↗ 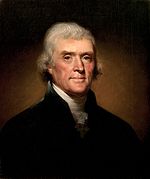 Did you know about Thomas Jefferson?

Removing or preventing corrupting dependence would enable men to be equal in practice. At age 16 Jefferson entered the College of William & Mary in Williamsburg and first met the law professor George Wythe who became his influential mentor. I contemplate it as a blot left in all our constitutions which if not covered will end in their destruction which is already hit by the gamblers in corruption and is sweeping away in its progress the fortunes and morals of our citizens.

Thomas Jefferson (April 13 1743 (April 2 1743 O. Elected Vice President in 1796 when he came in second to John Adams of the Federalists Jefferson opposed Adams and with Madison secretly wrote the Kentucky and Virginia Resolutions which attempted to nullify the Alien and Sedition Acts. In 1803 President Jefferson initiated a process of Indian tribal removal and relocation to the Louisiana Territory west of the Mississippi River in order to open lands for eventual American settlers.