Read through the most famous quotes from Theodore Roosevelt

Do what you can, with what you have, where you are. ↗

Believe you can and you're halfway there. ↗

It is hard to fail, but it is worse never to have tried to succeed. ↗

When you're at the end of your rope, tie a knot and hold on ↗

Keep your eyes on the stars, and your feet on the ground. ↗

To educate a person in the mind but not in morals is to educate a menace to society. ↗

Speak softly and carry a big stick; you will go far. ↗

If you could kick the person in the pants responsible for most of your trouble, you wouldn't sit for a month. ↗ 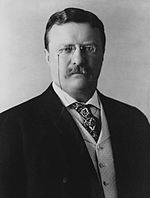 Did you know about Theodore Roosevelt?

" Leaving the convention with his idealism disillusioned by party politics Roosevelt said he had no further aspiration but to retire to his ranch in the Badlands of the Dakota Territory which he had purchased the previous year while on a buffalo hunting expedition. Media
Theodore Roosevelt was one of the first presidents whose voice was recorded for posterity. Wiegand has portrayed Roosevelt in all 50 US states.

On the world stage Roosevelt's policies were characterized by his slogan "Speak softly and carry a big stick". He successfully energized the GOP base as a highly visible campaigner to reelect President William McKinley on a platform of high tariffs the gold standard imperialism prosperity at home and victory abroad. He attended Harvard University where he studied biology boxed and developed an interest in naval affairs.