Read through the most famous quotes from John F. Kennedy

The Chinese use two brush strokes to write the word 'crisis.' One brush stroke stands for danger; the other for opportunity. In a crisis, be aware of the danger--but recognize the opportunity. ↗

Forgive your enemies, but never forget their names. ↗

We must find time to stop and thank the people who make a difference in our lives. ↗

The problems of the world cannot possibly be solved by skeptics or cynics whose horizons are limited by the obvious realities. We need men who can dream of things that never were. ↗

No matter how big the lie; repeat it often enough and the masses will regard it as the truth. ↗

Too often we enjoy the comfort of opinion without the discomfort of thought. ↗

As we express our gratitude, we must never forget that the highest appreciation is not to utter words, but to live by them. ↗ 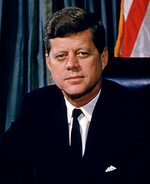 Did you know about John F. Kennedy?

To address fears that his being Catholic would impact his decision-making he famously told the Greater Houston Ministerial Association on September 12 1960 "I am not the Catholic candidate for President. Military service

In September 1941 after medical disqualification by the Army for his chronic lower back problems Kennedy joined the U. Lodge was instructed to try to get Diem and Nhu to step down and leave the country.

After military service as commander of the Motor Torpedo Boats PT-109 and PT-59 during World War II in the South Pacific Kennedy represented Massachusetts' 11th congressional district in the U. Senate from 1953 until 1960. Thereafter he served in the U.