Read through the most famous quotes from Bette Davis

When a man gives his opinion, he's a man. When a woman gives her opinion, she's a bitch. ↗

There comes a time in every woman's life when the only thing that helps is a glass of champagne. ↗

Love is not enough. It must be the foundation, the cornerstone- but not the complete structure. It is much too pliable, to yielding. ↗

The key to life is accepting challenges. Once someone stops doing this, he's dead. ↗

Men become much more attractive when they start looking older. But it doesn't do much for women, though we do have an advantage: make-up. ↗

I'de luv to kiss ya but I just washed my hair. ↗

To fulfill a dream, to be allowed to sweat over lonely labor, to be given a chance to create, is the meat and potatoes of life. The money is the gravy. ↗

Brought up to respect the conventions, love had to end in marriage. I'm afraid it did. ↗ 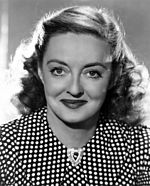 Did you know about Bette Davis?

Claudette Colbert won the award for It Happened One Night but the uproar led to a change in Academy voting procedures the following year whereby nominations were determined by votes from all eligible members of a particular branch rather than by a smaller committee with results independently tabulated by the accounting firm Price Waterhouse. " The New York Times hailed her as "becoming one of the most interesting of our screen actresses". Eventually Davis brought her case to court in Britain hoping to get out of her contract with Warner Bros.

Until the late 1940s Bette Davis was one of American cinema's most celebrated leading ladies known for her forceful and intense style. in 1932 and establiBette Davisd her career with several critically acclaimed performances. In 1999 Davis was placed second after Katharine Hepburn on the American Film Institute's list of the greatest female stars of all time.