Read through the most famous quotes from Angelina Jolie

Anything that feels good couldn't possibly be bad. ↗

Just start off with the same goals in mind. If you have the same values, same goals then you'll be on track for the same future. ↗

Without pain,there would be no suffering,without suffering we would never learn from our mistakes.To make it right, pain and suffering is the key to all windows, without it, there is no way of life. ↗

When I get logical, and I don't trust my instincts - that's when I get in trouble. ↗

#get #i #instincts #logical #trouble

I like someone who is a little crazy but coming from a good place. I think scars are sexy because it means you made a mistake that led to a mess. ↗

I don't see myself as beautiful, because I can see a lot of flaws. People have really odd opinions. They tell me I'm skinny, as if that's supposed to make me happy. ↗

If I make a fool of myself, who cares? I'm not frightened by anyone's perception of me. ↗ 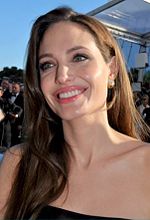 Did you know about Angelina Jolie?

In the following months Angelina Jolie returned to Cambodia for two weeks and met with Afghan refugees in Pakistan. In 2003 Angelina Jolie was the first recipient of the Citizen of the World Award by the United Nations Correspondents Association. Pocket Books.

& Mrs. Divorced from actors Jonny Lee Miller and Billy Bob Thornton Jolie now lives with actor Brad Pitt in a relationship notable for fervent media attention. Her first leading role in a major film was in the cyber-thriller Hackers (1995).