Read through the most famous quotes from Judy Garland

For it was not into my ear you whispered, but into my heart. It was not my lips you kissed, but my soul. ↗

In the silence of night I have often wished for just a few words of love from one man, rather than the applause of thousands of people. ↗

#else #first-rate #instead #second-rate #somebody

We cast away priceless time in dreams, born of imagination, fed upon illusion, and put to death by reality. ↗

'Twas not my lips you kissed but my soul. ↗

If I'm such a legend, then why am I so lonely? Let me tell you, legends are all very well if you've got somebody around who loves you. ↗

#around #got #i #legend #legends

You are never so alone as when you are ill on stage. The most nightmarish feeling in the world is suddenly to feel like throwing up in front of four thousand people. ↗ 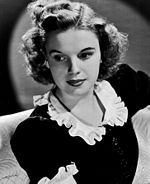 Did you know about Judy Garland?

He claimed that he had sent actress Judith Anderson a telegram containing the word "garland" and it stuck in his mind. On June 27 James Mason gave a eulogy at the funeral an Episcopal service led by the Rev. She was deeply devoted to him and was devastated in early 1940 when he eloped with Lana Turner.

She also had a long battle with drugs and alcohol which ultimately led to her death at the age of 47. DeMille Award for lifetime achievement in the motion picture industry. In 1997 Garland was posthumously awarded a Grammy Lifetime Achievement Award.