Read through the most famous quotes from Mae West

You only live once, but if you do it right, once is enough. ↗

There are no good girls gone wrong - just bad girls found out. ↗

I generally avoid temptation unless I can't resist it. ↗

#generally #i #resist #temptation #unless

I wrote the story myself. It's about a girl who lost her reputation and never missed it. ↗

Between two evils, I always pick the one I never tried before. ↗

#always #before #between #evils #i

Good sex is like good bridge. If you don't have a good partner, you'd better have a good hand. ↗

Every man I meet wants to protect me. I can't figure out what from. ↗

I'll try anything once, twice if I like it, three times to make sure. ↗

I'm no model lady. A model's just an imitation of the real thing. ↗ 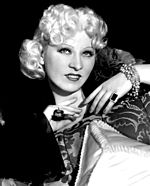 Did you know about Mae West?

That same year West played opposite Randolph Scott in Go West Young Man. She used the alias Jane Mast early in her career. After Go West Young Man West starred in Every Day's a Holiday (1937) for Paramount before their association came to an end.

Known for her bawdy double entendres West made a name for herself in vaudeville and on the stage in New York before moving to Hollywood to become a comedienne actress and writer in the motion picture industry. One of the more controversial movie stars of her day West encountered many problems including censorship.