Read through the most famous quotes from Katharine Hepburn

Sometimes I wonder if men and women really suit each other. Perhaps they should live next door and just visit now and then. ↗

Life is hard. After all, it kills you. ↗

I have not lived as a woman. I have lived as a man. I've just done what I damn well wanted to, and I've made enough money to support myself, and ain't afraid of being alone. ↗

What in the world would we do without our libraries? ↗

If you want to sacrifice the admiration of many men for the criticism of one, go ahead, get married. ↗

#admiration #ahead #criticism #get #get married

I'm an atheist, and that's it. I believe there's nothing we can know except that we should be kind to each other and do what we can for people. ↗

Acting is the most minor of gifts and not a very high-class way to earn a living. After all, Shirley Temple could do it at the age of four. ↗

I don't care what is written about me as long as it isn't true. ↗ 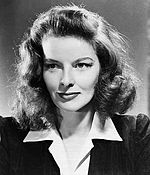 Did you know about Katharine Hepburn?

She remained active into old age making her final screen appearance in 1994 at the age of 87. Selznick recounted that he took a "tremendous chance" in casting the unusual actress. Little Women was one of Hepburn's personal favorites and Katharine Hepburn was proud of her performance later saying "I defy anyone to be as good as I was [as Jo]".

After four years in the theatre favorable reviews of her work on Broadway brought her to the attention of Hollywood. Her early years in the film industry were marked with success including an Academy Award for her third picture Morning Glory (1933) but this was followed by a series of commercial failures. Known for her headstrong independence and spirited personality Hepburn's career as a Hollywood leading lady spanned more than 60 years.