Read through the most famous quotes from Laurence Sterne

What a large volume of adventures may be grasped within this little span of life by him who interests himself in everything. ↗

I begin with writing the first sentence—and trusting to Almighty God for the second. ↗

Human nature is the same in all professions. ↗

What a large volume of adventures may be grasped within this span of life by him who interests his heart in everything. ↗

People who are always taking care of their health are like misers, who are hoarding a treasure which they have never spirit enough to enjoy. ↗

To write a book is for all the world like humming a song—be but in tune with yourself, madam, 'tis no matter how high or low you take it. ↗

For every ten jokes you acquire a hundred enemies. ↗

#every #hundred #jokes #ten #you

An English man does not travel to see English men. ↗

Nothing is so perfectly amusing as a total change of ideas. ↗ 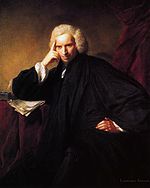 Did you know about Laurence Sterne?

The publication of Tristram Shandy made Sterne famous in London and on the continent. ISBN 1-4039-3454-1
D. In 1741–42 Sterne wrote political articles supporting the administration of Sir Robert Walpole for a newspaper founded by his uncle but soon withdrew from politics in disgust.

Laurence Sterne (24 November 1713 – 18 March 1768) was an Anglo-Irish novelist and an Anglican clergyman. Sterne died in London after years of fighting consumption.