Read through the most famous quotes from Abraham Lincoln

Knavery and flattery are blood relations. ↗

Some single mind must be master, else there will be no agreement in anything. ↗

#anything #else #master #mind #must

The people themselves, and not their servants, can safely reverse their own deliberate decisions. ↗

The best way to destroy an enemy is to make him a friend. ↗ 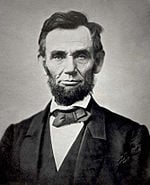 Did you know about Abraham Lincoln?

Twice a week Lincoln would meet with his cabinet in the afternoon and occasionally Mary Lincoln would force him to take a carriage ride because Abraham Lincoln was concerned he was working too hard. Lincoln authorized Grant to target the Confederate infrastructure—such as plantations railroads and bridges—hoping to destroy the South's morale and weaken its economic ability to continue fighting. Upon ratification it became the Thirteenth Amendment to the United States Constitution on December 6 1865.

presidents the others by scholars being George Washington and Franklin D. With almost no support in the South Lincoln swept the North and was elected president in 1860. "
When the North enthusiastically rallied behind the national flag after the Confederate attack on Fort Sumter on April 12 1861 Lincoln concentrated on the military and political dimensions of the war effort.