Read through the most famous quotes from Arthur Henderson

It has become impossible to give up the enterprise of disarmament without abandoning the whole great adventure of building up a collective peace system. ↗

To solve the problem of organizing world peace we must establish world law and order. ↗

Another essential to a universal and durable peace is social justice. ↗

As a first step there must be an offer to achieve equality of rights in disarmament by abolishing the weapons forbidden to the Central Powers by the Peace Treaties. ↗

In our modern world of interdependent nations, hardly any state can wage war successfully without raising loans and buying war materials of every kind in the markets of other nations. ↗

In some states militant nationalism has gone to the lengths of dictatorship, the cult of the absolute or totalitarian state and the glorification of war. ↗

Moreover, war has become a thing potentially so terrible and destructive that it should have been the common aim of statesmen to put an end to it forever. ↗

On the contrary, the characteristic element of the present situation is that economic questions have finally and irrevocably invaded the domain of public life and politics. ↗

One of the first essentials is a policy of unreserved political cooperation with all the nations of the world. ↗

The forces that are driving mankind toward unity and peace are deep-seated and powerful. They are material and natural, as well as moral and intellectual. ↗ 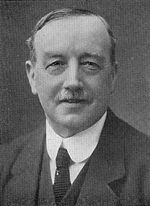 Did you know about Arthur Henderson?

Uniquely he was elected to Parliament a total of five times at by-elections where he had not been the previous MP and he holds the record for the greatest number of comebacks from losing his seat. In 1884 Henderson lost his job and concentrated on his education and preaching commitments.

He was popular among his colleagues who called him "Uncle Arthur" in acknowledgement of his integrity devotion to the cause and unperturbability. Arthur Henderson (20 September 1863 – 20 October 1935) was a British iron moulder and Labour politician.