Read through the most famous quotes from David Cameron

Believe me I do understand and I am disgusted by the idea that we should aim for any less for a child from a poor background than a rich one. ↗

At a time when we're having to take such difficult decisions about how to cut back without damaging the things that matter the most, we should strain every sinew to cut error, waste and fraud. ↗

I know the British people and they are not passengers - they are drivers. ↗

Britain is characterized not just by its independence but, above all, by its openness. ↗

Christmas gives us the opportunity to pause and reflect on the important things around us - a time when we can look back on the year that has passed and prepare for the year ahead. ↗

#around #back #christmas #gives #important

Edward Heath and Richard Nixon took personal awkwardness with each other to new and excruciating levels. ↗

For me, and I suspect for lots of other people too, bad things actually sometimes make you think more about faith and the fact that you're not facing these things on your own. ↗

We spend billions of pounds on welfare, yet millions are trapped on welfare. It's not worth their while going into work. ↗

It does not seem to me that the steps which would be needed to make Britain - and others - more comfortable in their relationship in the European Union are inherently so outlandish or unreasonable. ↗

It is vital that we get these policies right as we take forward our plans to drive down the deficit and transform our economy. ↗

#down #drive #economy #forward #get 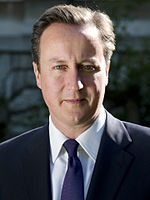 Did you know about David Cameron?

At the end of May 2011 Cameron stepped down as patron of the Jewish National Fund the first British prime minister not to be patron of the charity in the 110 years of its existence. " As Leader of the Opposition Cameron stated that he did not intend to oppose the government as a matter of course and would offer his support in areas of agreement. Sir Tom Cowie working-class founder of Arriva and former Conservative donor ceased his donations in August 2007 due to disillusionment with Cameron's leadership saying "the Tory party seems to be run now by Old Etonians and they don't seem to understand how other people live.

David William Donald Cameron (pronunciation: /ˈkæmᵊrən/; born 9 October 1966) is the Prime Minister of the United Kingdom First Lord of the Treasury Minister for the Civil Service and Leader of the Conservative Party. He then joined the Conservative Research Department and became Special Adviser to Norman Lamont and then to Michael Howard. In the 2010 general election held on 6 May the Conservatives won 307 seats in a hung parliament.