Read through the most famous quotes from Boris Johnson

My chances of being PM are about as good as the chances of finding Elvis on Mars, or my being reincarnated as an olive. ↗

My friends, as I have discovered myself, there are no disasters, only opportunities. And, indeed, opportunities for fresh disasters. ↗

But if people want to swim in the Thames, if they want to take their lives into their own hands, then they should be able to do so with all the freedom and exhilaration of our woad-painted ancestors. ↗

I want London to be a competitive, dynamic place to come to work. ↗

It is possible to have a pretty good life and career being a leech and a parasite in the media world, gadding about from TV studio to TV studio, writing inconsequential pieces and having a good time. ↗

London is a fantastic creator of jobs - but many of these jobs are going to people who don't originate in this country. ↗

My policy on cake is pro having it and pro eating it. ↗

I have as much chance of becoming Prime Minister as of being decapitated by a frisbee or of finding Elvis. ↗

I have not been more robust towards female rather than male assembly members and I do not believe I have been remotely sexist. ↗

My speaking style was criticised by no less an authority than Arnold Schwarzenegger. It was a low moment, my friends, to have my rhetorical skills denounced by a monosyllabic Austrian cyborg. ↗ 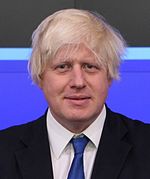 Did you know about Boris Johnson?

He is one of few British politicians identifiable by his first name alone. Dennis the Menace). Guppy wiBoris Johnsond to have Collier beaten up for attempting to smear members of his family.

Initially coming to public attention as a journalist he became editor of The Spectator in 1999 then later served as the Member of Parliament for Henley from the 2001 general election until 2008. During his first term he banned alcohol on public transport implemented measures to encourage business and oversaw the 2012 London Olympic Games. Under Conservative leaders Michael Howard and David Cameron Johnson served on the opposition front bench first as Shadow Minister for Culture Communications and Creative Industries and then for Higher Education.