Read through the most famous quotes from Arthur Scargill

All too often miners, and indeed other trade unionists, underestimate the economic strength they have. ↗

If you've got an industry where you've got massive investment, it doesn't matter whether you bring in alternative supplies. You still lose the money on that industry. ↗

The trade unions and the Labour Party... failed miserably. Instead of giving concrete support, and calling upon workers to take industrial action, they did nothing. ↗

There's a feeling that strength is determined by the size of a union. That clearly is nonsense. ↗ 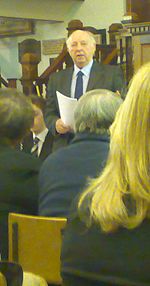 Did you know about Arthur Scargill?

In the 1981 election for NUM President Scargill secured around 70% of the vote. A former Labour Party member he is now the leader of the Socialist Labour Party (SLP) which he founded in 1996. Scargill's decision not to hold a ballot of members was seen as an erosion of democracy within the union but the role of ballots in decision-making had been made very unclear after previous leader Joe Gormley had ignored two ballots over wage reforms and his decisions had been upheld after appeals to court were made.

Arthur Scargill (born 11 January 1938) is a British politician and trade unionist who was president of the National Union of Mineworkers (NUM) from 1982 to 2002 leading the union through the 1984/85 miners' strike a key event in British labour and political history.