Read through the most famous quotes from Neville Chamberlain

We would fight not for the political future of a distant city, rather for principles whose destruction would ruin the possibility of peace and security for the peoples of the earth. ↗

How horrible, fantastic, incredible, it is that we should be digging trenches and trying on gas-masks here because of a quarrel in a faraway country between people of whom we know nothing. ↗

We should seek by all means in our power to avoid war, by analysing possible causes, by trying to remove them, by discussion in a spirit of collaboration and good will. ↗

I believe it is peace in our time. ↗

In war, whichever side may call itself the victor, there are no winners, but all are losers. ↗

#itself #losers #may #side #victor 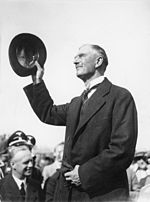 Did you know about Neville Chamberlain?

He then went to Downing Street where both the street and the front hall of Number 10 were packed. Under the proposals made at Berchtesgaden the Sudetenland would be annexed by Germany if a plebiscite in the Sudetenland favoured it. Another major piece of legislation passed that year was the Holidays with Pay Act.

Most historians in the generation following Chamberlain's death held similar views led by Churchill in The Gathering Storm. He was rapidly promoted in 1923 to Minister of Health and then Chancellor of the Exchequer. After a short Labour-led government he returned as Minister of Health introducing a range of reform measures from 1924 to 1929.