Read through the most famous quotes from Dr. Seuss

Don't cry because it's over, smile because it happened. ↗

You know you're in love when you can't fall asleep because reality is finally better than your dreams. ↗

I like nonsense, it wakes up the brain cells. Fantasy is a necessary ingredient in living. ↗

Sometimes the questions are complicated and the answers are simple. ↗

Today you are You, that is truer than true. There is no one alive who is Youer than You. ↗

A person's a person, no matter how small. ↗

Unless someone like you cares a whole awful lot, Nothing is going to get better. It's not. ↗

Fantasy is a necessary ingredient in living, it's a way of looking at life through the wrong end of a telescope. ↗ 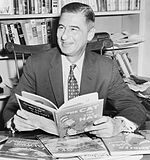 Did you know about Dr. Seuss?

Seuss's honors include two Academy awards two Emmy awards a Peabody award the Laura Ingalls Wilder Medal and the Pulitzer Prize. Mulberry Street in Springfield made famous in Dr. As a result Dean Craven Laycock insisted that he resign from all extracurricular activities including the college humor magazine.

It was not uncommon for him to throw out 95% of his material until he settled on a theme for his book. He won the Lewis Carroll Shelf Award in 1958 for Horton Hatches the Egg and again in 1961 for And to Think That I Saw It on Mulberry Street. Theophrastus Seuss in college and later used Theo LeSieg and once Rosetta Stone as well as Dr.