Read through the most famous quotes from Vince Lombardi

The greatest accomplishment is not in never falling, but in rising again after you fall. ↗

If winning isn't everything, why do they keep score? ↗

#everything #keep #score #why #winning

If you can accept losing, you can't win. ↗

Fatigue makes cowards of us all. ↗

The price of success is hard work, dedication to the job at hand, and the determination that whether we win or lose, we have applied the best of ourselves to the task at hand. ↗

The only place success comes before work is in the dictionary. ↗

#before #comes #dictionary #only #place

Perfection is not attainable, but if we chase perfection we can catch excellence. ↗

#get #knocked #up #whether #you

Individual commitment to a group effort - that is what makes a team work, a company work, a society work, a civilization work. ↗

Football is like life - it requires perseverance, self-denial, hard work, sacrifice, dedication and respect for authority. ↗ 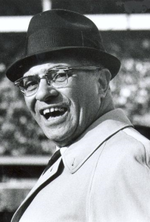 Did you know about Vince Lombardi?