The best thing to hold onto in life is each other.

Read through all quotes from Audrey Hepburn 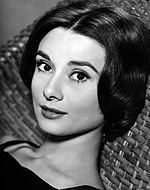 Did you know about Audrey Hepburn?

In Amsterdam Audrey Hepburn studied ballet with Sonia Gaskell before moving to London in 1948 to continue ballet training with Marie Rambert and perform as a chorus girl in West End musical theatre productions. She met Italian psychiatrist Andrea Dotti on a cruise and fell in love with him on a trip to Greek ruins. In the 1960s Hepburn would finally locate him again in Dublin through the Red Cross.

She appeared in fewer films as her life went on devoting much of her later life to UNICEF. Born in Ixelles a district of Brussels Hepburn spent her childhood between Belgium England and the Netherlands including German-occupied Arnhem during the Second World War. Recognised as both a film and fashion icon Hepburn was active during Hollywood's Golden Age.