Read through the most famous quotes from Groucho Marx

I find television very educating. Every time somebody turns on the set, I go into the other room and read a book. ↗

#educating #every #every time #find #go

From the moment I picked your book up until I laid it down, I convulsed with laughter. Someday I intend on reading it. ↗

Learn from the mistakes of others. You can never live long enough to make them all yourself. ↗

I never forget a face, but in your case I'll be glad to make an exception. ↗

The secret of life is honesty and fair dealing. If you can fake that, you've got it made. ↗

I sent the club a wire stating, PLEASE ACCEPT MY RESIGNATION. I DON'T WANT TO BELONG TO ANY CLUB THAT WILL ACCEPT ME AS A MEMBER. ↗

I've had a perfectly wonderful evening, but this wasn't it. ↗ 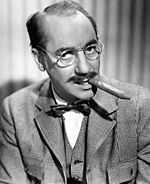 Did you know about Groucho Marx?

As a man who never had formal schooling to have his writings declared to be culturally important was a point of great satisfaction. Elton John accompanied Groucho to a performance of Jesus Christ Superstar. By the time the Marxes made their first movie they were major stars with sharply honed skills and when Groucho was relaunched to stardom on You Bet Your Life he had already been performing successfully for half a century.

He also had a successful solo career most notably as the host of the radio and television game show You Bet Your Life. He is known as a master of quick wit and widely considered one of the best comedians of the modern era. He made 13 feature films with his siblings the Marx Brothers of whom he was the third-born.